Libraries of the future: Scenarios for 2050

Scenarios are not predictions about the future; rather they describe possible futures. The workshops held to inform the Libraries of the Future project identified the critical factors that led to the highest impact on, and most uncertainty about, the future. These form the axes for scenarios: whether society and HE have open or closed values and whether HE provision is dominated by the state or by the market. Market here can be that operated either by the state or private sector. Three long-term scenarios were developed that explore these axes. 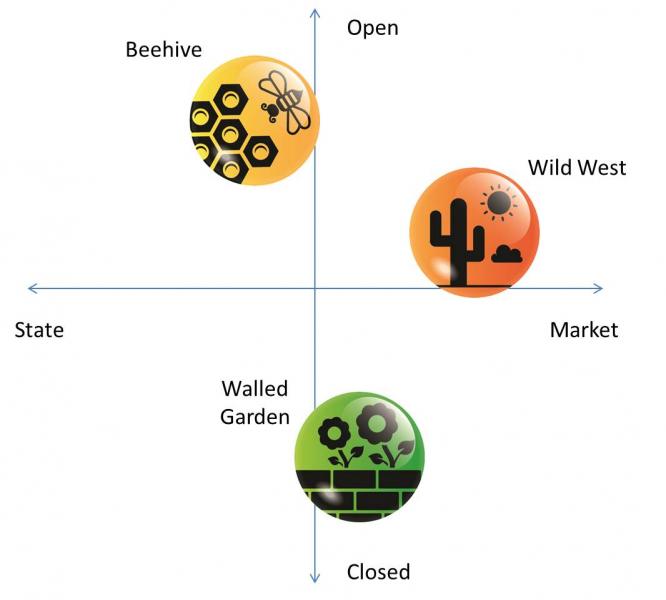 ‘Wild West’ has a no-holds-barred free-for-all flavour. Specifically, this world is dominated by capitalism and corporate power, including the HE sector. Private providers compete with each other and the state to offer students educational services, including information services and learning material. The power lies in the hands of the consumer (‘student’ being a rather old-fashioned term) who is able to pick and choose from courses and learning materials to create a personal educational experience.

‘Beehive’ draws obvious parallels with the hierarchical and structured life of the bee colony, where all is ordered to ensure the common good of the whole community. The Beehive scenario is a world in which society and HE have open values and the state is the primary funder and controller of HE. Its overriding aim is the production of a skilled workforce, and to this end it has created a largely homogenous HE system for the masses while allowing the elite to attend the few traditional institutions. A limited market is used to provide competition within the HE system to drive up quality.

A ‘Walled Garden’ is an oasis, shut-off from the outside world. Inhabitants of the garden neither know nor care much about the world beyond the garden’s comforting walls. After all, how could the flowers out there possibly be any better than those within the garden? HEIs in this scenario are ‘Walled Gardens’. The closed nature of society makes HEIs insular and inward-looking, isolated from other institutions by competing value systems. Provision of information services in this world is as much concerned with protecting their own materials from others as it is in enabling access.

Tags:
libraries of the future